This year marks the 25th anniversary of Vietnam – Republic of Korean diplomatic relations (22/12/1992 – 22/12/2017) which is a significant event in terms of promoting the cooperation in various fields based on understanding and mutual trust. In the series of activities to celebrate this important event, Quangnam province in collaboration with the Embassy of the Republic of Korea and the Korean Cultural Center in Vietnam hold the event "Korean Culture Days in Hoi An, Quang Nam 2017 " from March 11 to 12, 2017.
During the event, Hoi An ancient town will become more and more shimmering with colorful traditional lanterns of Korea and Hội An. At An Hoi Sculpture Garden, many booths are set up to showcase the culture, traditional handicraft, cuisine and to photograph with traditional Korean costume, etc.. that enable visitors to experience the unique culture of the beautiful country of Korea. 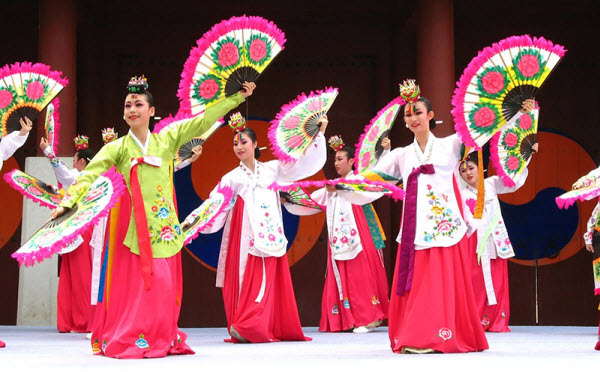 The highlight of this event is the art shows taking place on March 11 and 12 with paper Hanbok fashion show, famous contemporary art performances of Sachoom and Bibap and  traditional Korean art performances.
“Sachoom” is a band’s name as well as a nonverbal performance as it expresses itself using universal language of movement with a simple story. It requires a good coordination between the dancers and a combination with modern music and blending of humor. Bibap is a unique art form which takes place in a like-kitchen stage and kitchen utensils are used as instruments. These two types art forms are performed by two well-known Korean contemporary art troupes, promising to bring new spiritual taste for the audiences. Along with these contemporary performances, there are also traditional performances imbued with Korean culture.
Besides, Hoian (Quangnam) also participate in the event with cultural, art and cuisine exchange.
"Korean Cultural Days in Hoi An, Quang Nam 2017" has an important significance in the diplomatic relation between Vietnam and Korea in general and the city of Hoi An in particular. Hoi An has been a tourists’ favorite destination, especially Korean tourists’; this event plays a role in attracting more and more tourists to the city of Hoi An. More importantly, Hoi An will be much more believed to confirm its position as a city of festivals, international exchanges; and cultural connection in a spirit of friendship and humanity, thereby contributing to the peace of mankind.