Zero-waste communities start to emerge in Hoi An

Reserving a 2,600sq.m garden in Dong Na village in Cam Ha commune – a farming intensive suburban area of Hoi An – local farmers and businesses have joined hands to debut the first zero-waste agriculture and tourism zone in promoting ‘green’ tourism product in the tourism hub. 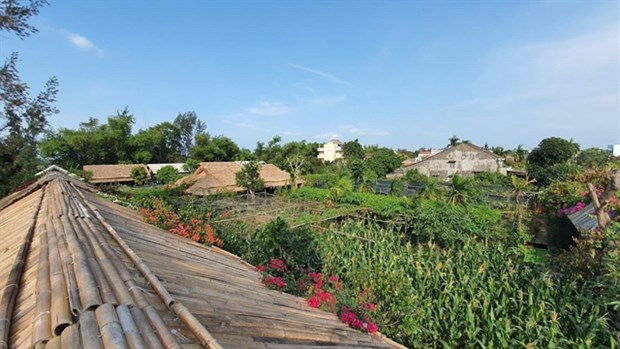 It’s also the first ever joint-venture among farmers and travel agency project that would help builds up a zero-waste community and non-plastic tourism chains in rural areas of Hoi An.

The KyBiMo zero-waste garden, which was built from 2018, was survived through the COVID-19 pandemic as it supplied enough healthy organic farm produce for a chain of restaurant and resorts during a two-month social distancing order from the Government of Vietnam.

The garden also built itself a source of organic waste from vendor juice pavilions in Hoi An and kitchen waste to fertilise for dozens of vegetable, roots and herbs, saving much from greengrocer’s and reducing organic waste each day.

“It’s a key sample for expanding a chain of organic farms – an agro-tourism experience and zero waste zone to tourist attraction in Hoi An. The garden would build up a sustainable and recycle ecology system in the tourism hub, boosting ‘green’ tourism industry and environment protection among tourists and community,” said Pham Vu Dung, the garden owner.

“We intentionally involved the participation of local farmers as a key factor in the development of organic and zero waste agro-tourism product – a new version in the sustainable tourism development in Hoi An,” he said.

Dung said travel agencies and businesses previously were main investors and operators of almost farming tours in the city, while local farmers only joined the project as employees.

“They (local farmers) must care the product with their experience and responsibility. They actually joined venture with us in reducing risk in operating agro-tourism project,” he added.

“Farmers, who leased their farms in the project, will play both roles of farmers and guides in hosting visitors. It means that they do care about the product with heart and responsibility.”

Following statistics, the organic production chain of KyBiMo zero-waste garden, which includes a resort, restaurant and a hotel, released 2 tonnes of waste per month, of which 71 percent were leftover food and decomposable waste for compost.

An amount of 160kg of waste were processed by dew worms in creating lucrative soil for garden.

Nguyen Cu, a local farmer, who leased the garden, said he actually joined the operation of the agro-tourism garden project with farming skills and experience.

“Previously, I only rent my garden to travel agencies and tour operators. They invested and operated themselves, but we only offered labour rate from farming. Now we do our job as active member of the project from gardening to kitchen works as well as tour guide,” Cu said.

The free-chemical fertiliser and zero waste agro-tourism garden project would be built on farming zones of Cam Kim, An My, Triem Tay villages along with favourite Tra Que garden village in emerging as new agro-tourism product after the Old Quarter of Hoi An.

Last year, the owners of 44 hotels, homestays, villas and restaurants as well as travel agencies in the central province of Quang Nam agreed to take action to reduce the plastic waste and building the 'Zero plastic waste tourism' brand.

Vu Thi My Hanh, manager of the An Nhien Farm, said organic kitchen waste was recycled into materials to create chemical-free dish-washing liquid at some restaurants in Hoi An.

She said at least 300 litres of used-cooking oil was used to produce chemical-free kitchen soap, while 300kg of single-use soap was also recycled for usable soaps for poor people.

Some companies in Hoi An have been producing straws, containers and souvenirs from bamboo and reed, while citizens have been encouraged to bring reusable bags to markets instead of taking plastic bags from sellers.

In an effort of building the first zero-waste communities in Hoi An, a zero-waste model project has been launched in of Thanh Dong village in Cam Thanh commune in Hoi An city and Tan Hiep commune on Cham Islands.

The building and sharing zero waste model in selected Asian communities project, which running through March of 2021 with total funding of more than 90,000 USD from USAID’s municipal waste recycling programme via the Global Alliance for Incinerator Alternatives (GAIA), will help residents in the two communities reduce the waste they release daily from 75 to 80 percent.

Vietnam, Indonesia, Sri Lanka and the Philippines are the beneficiaries of the USAID project.

The project also aims to promote waste classification and recycling, and plastic waste reduction and composting among the community.

The alliance focuses on promoting zero waste, reducing problematic waste streams like plastic, and putting an end to the burning of waste, she said.

“The programme also aims to boost waste classification at source and recycling as well as composting before disposal to a dump. It also creates a monitoring solution for plastic waste and database for prolonged solid waste management,” Xuan added.

Hoi An City produces 100 tonnes of garbage each day, of which 30 percent is recycled or classified, while a local incinerator can only process 50 tonnes each day.

Cham islands population of 2,200 release from 3 to 3.5 tonnes of waste each day, with most of it burnt or sent to a landfill.

The islands, 20km off the coast of Hoi An, are seen as the first site in Vietnam promoting the successful reduction of plastic bags and 3-Rs (reduce, reuse and recycle) since 2011.

The islands, a world biosphere reserve site, ban all use of plastic bags among local residents and tourists, and a ‘say no to single-use plastic straws and cups’ campaign was launched early this year./.
VNA