The ancient city of Hoi An has launched the ‘Green Fence – My Village’s Beauty’ campaign to promote greenery among households and home-stay hosts in ecotourism sites.
The campaign will last until late this year. Awards will be given for the most impressive decoration.
Hoi An is the favourite destination in central Viet Nam, with more than 2 million tourists annually.
The UNESCO World Heritage City covers an area of 60sq.km, with 22.5sq.km of agriculture and forests and 11sq.km of lakes and channels.
The city has developed ecotourism in surrounding craft villages, such as carpentry in Kim Bong Village, mat weaving in Ban Thach Village, fishing in Tra Nhieu Village, vegetable gardens in Tra Que Village, and farming in Triem Tay Village.
These old villages are favourite rendezvous spots for local and foreign tourists, featuring tranquil rural scenery and old trades.
Villagers of Triem Tay, on the other side of the Hoai River and opposite Hoi An, replaced their concrete fence with creepers, flowers and bushes, creating a ‘green and cool’ landscape.
Hoi An was the first city in Viet Nam to host a Car Free Day, in an effort to make the environment cleaner in the tourism hub.
The city also launched non-plastic bag use, as well as 3-R (reduce, reuse and recycle) programmes.
The city’s people’s committee plans to promote bicycle use among public agencies, as well as to boost bicycle use among local residents with a goal of 100,000 local bicycles in use.
Most foreign tourists use bicycles while touring the city, beaches and villages during their visits to Hoi An.
The city has been using a solar-powered public lighting system along the Hoai River Square since 2013. 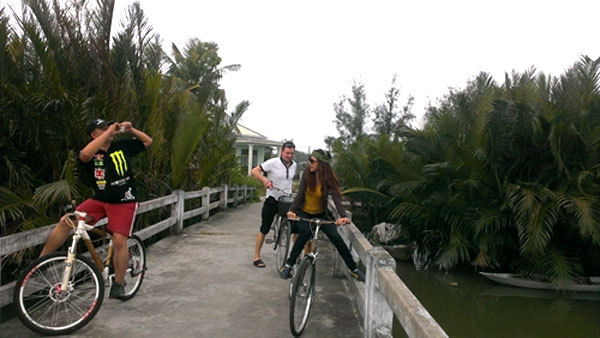 Sight-seeing: Tourists cycle in the shadow of a nipa palm forest in Cam Thanh Village, a suburb of Hoi An City. The village is a favourite site for tourists with its crafts and rural lifestyle. 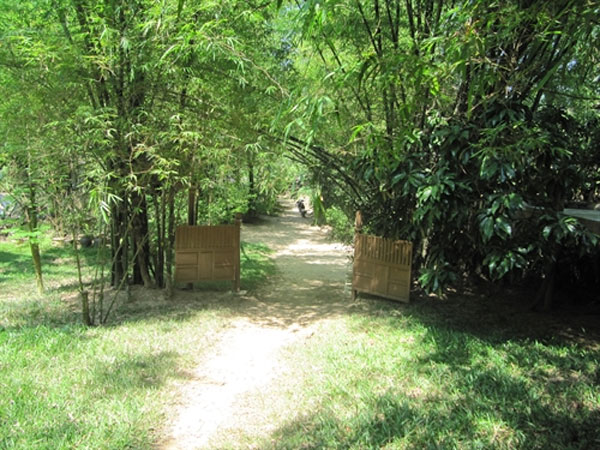 Vibrant greenery: The ancient city has launched a campaign to promote greenery among households and home-stay hosts in ecotourism sites. The campaign will last until late this year. Awards will be given for the most impressive decoration.

Hoi An and Naha City, the capital of Japan’s Okinawa Prefecture, co-operated to develop Hoi An as an ecotourism city.
The city’s Hoai River and its channels made the list of the 10 most famous canals in the world on the US-based travel website touropia.com in 2014.
Hoi An was chosen for the 2013 Townscape Award by the UN-Habitat Regional Office in Asia. It was also listed among the top 10 Asian cities in US magazine Conde Nast Traveler’s Readers Choice Awards in 2012.A survey showed 27 per cent of international tourists visit the city to learn about the culture and history of Hoi An, the My Son Sanctuary, and the Cham Islands Biosphere Reserve.