Childhood Japanese lessons in the heart of Hội An city

When the last rays of late afternoon fell on Hội An, lanterns began glitter all over the old town and a free Japanese class opened in an ancient house on Nguyễn Thái Học street. 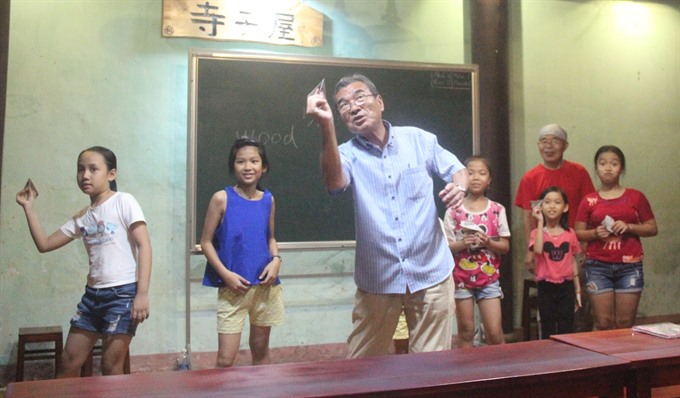 The free class focuses mostly on Japanese language, culture and customs, and it has been offered to local kids for almost a year.

The initiative was launched by members of Tokyo Shirubakai art troupe during the Hội An – Japan Cultural Exchange in 2015 so that future generations in Hội An can continue to build the friendly, cooperative relationship between the two countries.

“This is expected to be a 10-year project. Besides Japanese language and life skill lessons, students will have chance to explore the culture and customs of Japan. It is a beautiful cultural convergence between the two countries in the heart of the old quarter,” said Phùng.

Coming to the class in a late afternoon, I could feel the cosy atmosphere and was impressed by the orderly organised chairs and tables.

Abe Toru, 77 years old, wore wooden sandals and a formal shirt and trousers, and he opened the door to welcome his students with a bright smile.

Student Thu Hiền told me “The teacher has a great sense of humour. He is also very punctual so we tell each other to make it to class on time.”

Teacher’s assistant Cao Thị Hồng Nhung said Toru is always the first to come to the class and organise tables and chairs by himself. He’s also the last to come home, after he cleans up all things.

Toru’s class does not follow rigid curriculum books. Lessons that young children get here are how to use chopsticks, fold paper, understand maps, learn greetings and songs in Japanese.

“The young Vietnamese are very smart and so are the kids. They need not only knowledge but also skills to develop and be mature. We want to teach them those needed skills with the hope that they will be useful for the students in the future,” said Toru.

Without a notice from the teacher, young students go to their seat. Abe Toru carefully opens his notebook, checking in his students. All ten are present. The students’ black smart eyes engage the teacher’s every movement.

Besides basic Japanese lessons, students have chance to play games, explore culture, and learn about life skills and the morality and etiquette of Japanese people.

After greeting in Japanese, students are all excited to try on their teacher’s sandals, geta. Students put their little foot on the sandal, which makes clip-clopping sound every time it touches the ground.

Geta is a traditional type of Japanese sandal that can be worn in snow and rain and keep foot dry with its the height and water-resistance.

The whole class is excited after teacher assistant Hồng Nhung explains the meaning of the sandals. Along with peach blossom and kimono, geta is a dispensable part of Japan.

“Studying here with Japanese teachers is very interesting, we don’t find it stressed by loads of homework. Instead, we learn greeting in Japanese and join fun games. It is very engaging,” Phạm Võ Hồng An, 10 years old, said.

Toru then opens his colourful papers, distributing them to students, who have chance to learn about Japan’s origami folding, the art of paper folding.

Japanese learn about origami folding to acquire patient, meticulous and calm traits. The colourful papers turn into eye-catching birds and pigs with the help of the skilful hands of the teacher, who then slowly instructs his students to fold paper.

Abe Toru was an engineer who first came to Việt Nam 13 years ago. He said he was so attracted by the landscape and Vietnamese people that he decided to open his own business in HCM City.

As he is retired now, he has found a new calling.

“I want to do something meaningful, instead of having boring retirement days,” said Toru. VNS 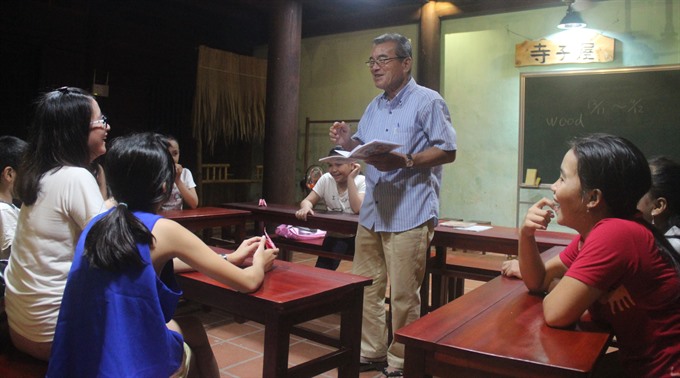 The Japanese language and culture education project for primary school students was officially launched in October, 2016 under the name Terakoya by the Culture and Sports centre of the central city of Hội An, in co-operation with the Tokyo Shirubakai Art Troupe. —Photo courtesy of Hoài Văn 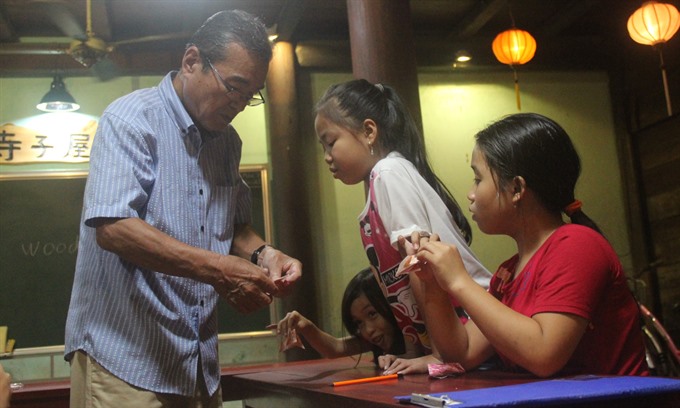